After spending a dozen or so winters freezing our behinds and wondering why Christmas always comes when it is the worst time to travel, we finally have the luxury of having the longest vacation coincide with the perfect travel season. For the first available Christmas (last one was spent on getting settled), we chose Ahmedabad - it wasn't much of a competition as the contenders were the destinations you can fly non-stop from Pune. Once our research concluded, Ahmedabad expanded into bits and pieces of Central Gujarat.

The first day was supposed to be spent just getting to our hotel. But the route from the Ahmedabad airport took us past the ornate Hatheesing and Swami Narayan temples and one glimpse of those was enough to make us hop on the first auto rickshaw back to check those out. My three months of exclusive research, which had conveniently left these out, now looked very suspect. Our next couple of days were spent checking out Ahmedabad's famous mosques and its less than famous museums. Mosques are one of the prime attractions of the city. They were built by 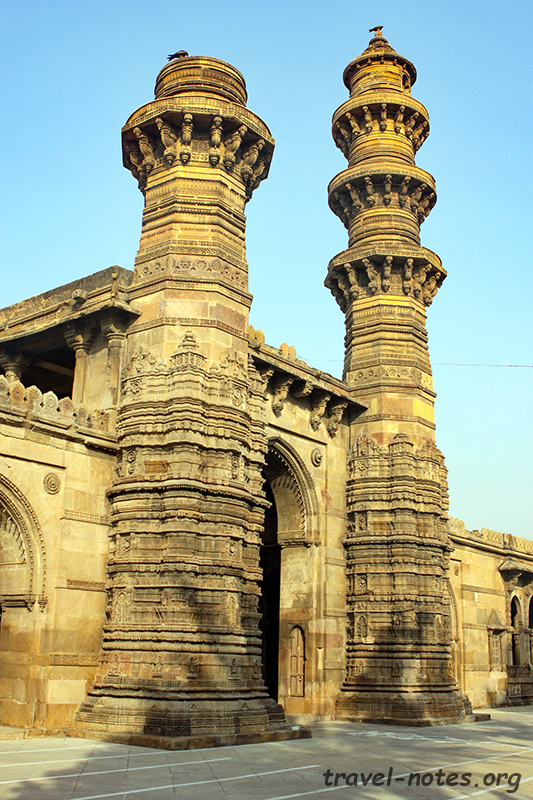 Ahmed Shah (the founder) and his immediate successors. Since they were the first Islamic rulers of this region, they had to make do with the Hindu and Jain artisans coming fresh off building temples. The result, the mosques are an unique blend of Islamic, Hindu and Jain architecture. Couple of the architecture wonders need a special mention. First is the wonderful spider web thin jalis (carved marble lattice) of Sidi Sayeed mosque which will make any self respecting spider squirm with envy. Second being the julta minars (shaking 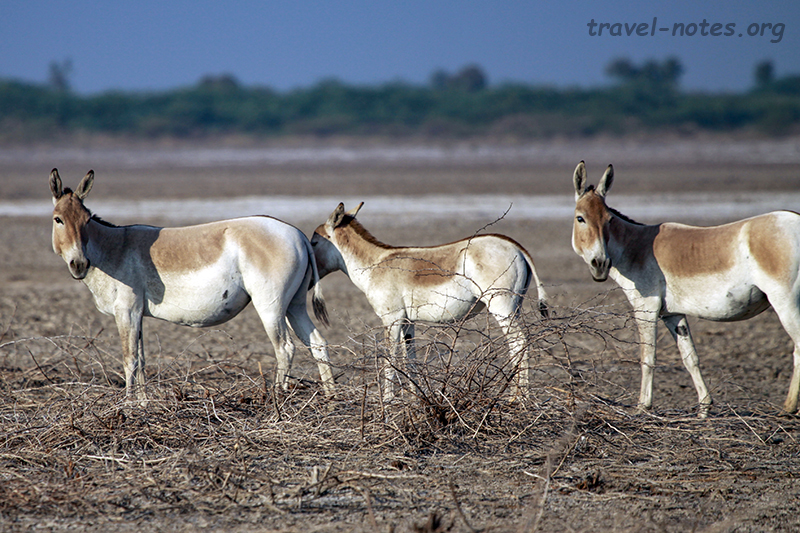 minarets) of Raj Babri and Sidi Bhashir mosques. These minarets are built to shake during (hence survive) earthquakes, during which they will make any self-respecting Bollywood actress squirm with envy.

Among the museums, the pick (probably of the nation) is the Calico Museum, a textile museum housing an never ending array of antique Indian textiles covering everything from Patolas to Pichwais. Even if you don't fancy costumes, this museum is worth visiting for just the buildings that house the collection - the lavish Sarabhai residence and some antique havelis painstakingly reassembled here from the decaying Ahmedabad city. The only trouble with visiting the museum is that one has to take two private tours (needing weeks of advance bookings) and the timings are such that it will eat up one full day. Outside of Calico, NC Mehta museum is the only one worth the effort. We took turns (Pranav and first millennium art pieces don't mix well) checking out these museums.

Somewhere in-between rushing between the museums and the mosques, we managed to pay the mandatory homage to Gandhi at the Sabarmati Ashram. Gandhi founded this in 1915 and used it as a base to launch his long struggle of Indian independence. It is from here that the great man decided to walk 241 miles down to Dandi to make salt to either protest the salt taxation laws of British or as a futile attempt to add some taste to the city's insipid idlis - no one has figured which one was the right reason yet. On the following day, we went around checking out the step wells around the city. Step well construction started in Moenjodaro, but reached its pinnacle in Gujarat. Two of the best around here are the Adalaj and Dada Hari - both built during Islamic times under Mahmud Begara, the grand son of Ahmed Shah and the dynasty's most famous ruler.

Before for we left Ahmedabad, we had time to drive in and out of Sarkhej Roza, a set of Islamic buildings clustered around a large tank built by Mahmud Shah II. The place contains the tombs of Mahmud Begara, his patron saint Ganj Baksh and a large spacious mosque where Pranav had fun running around in circles. Reason we left Ahmedabad was to drive 2 hours west to Zainabad, a small nondescript dusty village, but more importantly the gateway to Wild Ass Sanctuary, largest of its kind in the country. There is just one basic campsite to stay here who also arrange the safaris into the park. As Pranav and open jeep safaris don't mix well either, Aparna and I went for the evening safari and my mum and I went for the morning while all of us spent a really cold night in between curled up inside warm comforters. Watching herds of wild asses galloping around the endless plains of little rann and watching a spectacular sunset over it was the single most memorable moment of our trip.

After the overnighter at the sanctuary, we returned to Ahmedabad, this time to visit a couple of astonishing monuments, both of which can be covered on a short day trip from the city. Since Pranav and a day trip of any length don't mix well either, we spent two days (taking turns) to visit the monuments. The first of these monuments is the Sun Temple at Modhera, situated at about an hour and a half drive from the city. The temple was built about a millennium ago by Bhimdev I of Solanki dynasty. Unfortunately, Mahmud of Ghazni attacked it about an year after its construction and left it in ruins. The well proportioned temple is

adorned with all the sculptures and carvings that Khajuraho is famous for, except that these have taken a pounding from wind erosion. What is left of the wind and Mahmud's rampage is still enough to take our breath away. The second of the monuments is the Rani-Ki-Vav (Queen's step well) situated in Patan, about 45 min from the Sun Temple. The vav (which 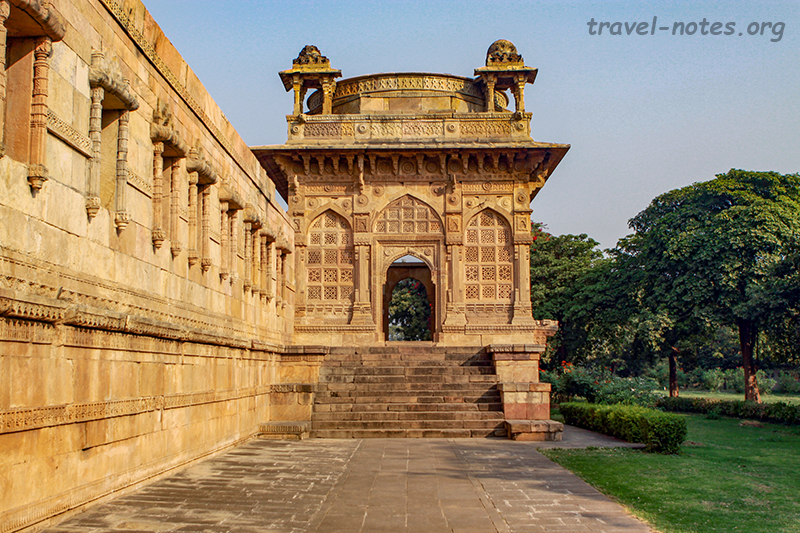 was built by the queen of Bhimdev I) was covered by silt until a few decades ago, thanks to which the sculptures look as if they were carved yesterday. Unlike the step wells in the city, this one is a Hindu construction which means the walls and the pillars are exploding with exquisite sculptures covering all the known and unknown gods of the Hindu pantheon. Unless you are the wild ass of Kutch, your jaw is sure to drop gaping at the monument. Since we took turns visiting these monuments, I had enough time to take off on my own to put a quick visit to Lothal, a city dating from the Indus Valley Civilisation located at about an hour's drive from Ahmedabad. There is nothing left off it and unless simply being among the ruins of a 4500 year old city gives you goose bumps, you can skip this side trip.

For the final leg of the trip, we drove down 2 hours to Baroda, the seat of the Gaekwads who ruled the region as vassals to the British empire. Our first stop there was the less visited Tambekar Wada, a 150 year old townhouse of a Marata diwan, interiors of which are filled with some fine murals. In the afternoon, we took turns to visit the Baroda Museum which houses everything from Chinese jade carvings to stuffed African wildebeest to Peter Paul Rubens to a gigantic blue whale skeleton. The following morning, we went to visit Champaner-Pavagadh World Heritage Site. The Rajput stronghold was captured by Mahmud Begara in 1484 who filled it with some impressive mosques, the best of which is the stunning Jami Masjid. The place was counter conquered by Humayun in 1535 and has remained in ruins ever since.

Nobody leaves Baroda without visiting its crown jewel, the lavish 180,000 pound private residence of Maharaja Sayaji Rao Gaekwad III, the largest of its kind on the planet. Since we are nobody, we did the customary gaping at the opulence trip to the palace and the adjacent museum which houses the largest Ravi Varma collection in the world (Ravi Varma being the court painter of the Maharaja and only painter from India that I have ever heard of) and some impressive knock offs of the European masters. Finally (yes, there is an end to every trip), came the quirky EME temple, an aluminium domed temple built by army guys, impressive enough to be a good sign off of a wonderful trip.

I cannot end this travelogue without mentioning the one thing that stood out amongst everything we experienced on this trip - the ubiquitous Guajarati Thali. The finger licking array of dishes were so heavenly that we repeated it every day of the trip. The only other thing I relish doing everyday is breathing. Gujarat tourism is trying to convince everyone that there is more the state than its thalis. Well, they have a task on their hands, desert donkeys and ornate step wells notwithstanding. As for me, I have a task on my hand to match this trip in my future planning.